It is fundamental that all different kinds of cases and circumstances get shared in order to tackle them collectively. It will also be a way to make sure that everyone living in the estate (even in another estate!) is aware of a situation that might be affecting them currently or in a foreseeable future.

*We will not be having any press presence in this meeting, as everyone should feel completely comfortable taking part on it. So, please journalists abstain! and check out our media policy in the tag “Interviews”.

As we move forward into the second occupation of the Loughborough Park Estate, it is worth taking a look at this piece on the history of the estate, the dirty dealings of the Guinness Trust, and the events that have led up to this current protest. We meant it when we said we would return if Guinness didn’t adequately respond to the original demands, and we will remain in occupation until they do.

Some ASTs still have not been made any offers for future accommodation, in spite of the fact that the deadline for removal at the end of the month creeps ever nearer. It’s not good enough and Guinness Trust knows it. 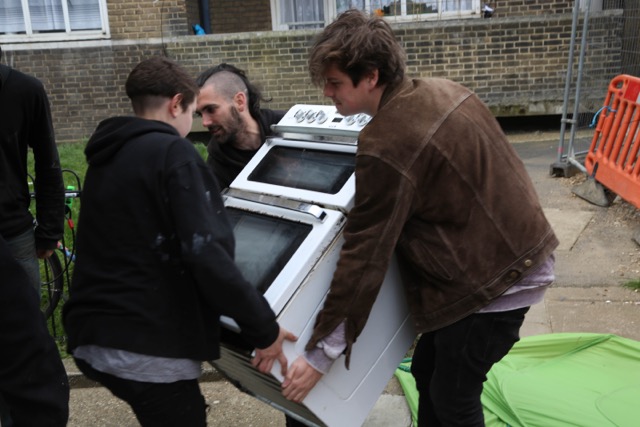 In their new flats they will have to pass a 12 month test before their tenancies are secure and will pay much higher rents.

No evictions until all shorthold tenants have been adequately rehoused!

Due to the planned ‘regeneration’ (gentrification) of the Loughborough Park Estate, the Guinness Trust for many years been moving out its long-term tenants and replacing them with short-term tenants. Since these tenants were recently told to leave, a campaign – involving the occupation of a flat and blockades of the building site – has been succeeding in getting many offers of housing in other places. These offers, however, are not all good enough, become secure only after a year-long trial period and force them to pay higher rents.

The Trust lacks planning permission for the next phase of development. So while many struggle to afford anywhere to live in Brixton, the Trust plans to leave these flats empty. Many empty flats have been smashed up to make them uninhabitable. They are also paying for the security company Camelot to provide “live-in guardians”. Camelot makes huge profits by preying on peoples’ desperation for cheap housing. They rent out flats at slightly less than market rates but without any form of tenancy agreement so are able to impose extremely restrictive rules, enforced with regular unannounced room inspections and the threat of immediate eviction.

COME TO OCCUPATION HOUSE! you can check our Wishlist beforehand 🙂

A huge thank you to all who came out this morning in the cold to protest against the shameful treatment of the shorthold tenants by Guinness.

Having stopped the eviction that was due to take place this morning and won the right of the AST tenants to apply for homes in London, we took the decision to end the occupation.

But the campaign to make sure these 44 familes are not evicted will continue – we can’t allow this social cleansing.

If Guinness get any further court orders to send bailiffs to evict anyone off the estate we will organise again to resist it.

Well done to all involved in the success of the campaign so far.

Please join us if you can!

Yesterday afternoon we heard that Guinness Trust had called off the bailiffs that were due to evict a family, including children and a disabled man this morning. This is a really important victory for the campaign!

But we still want the threat of eviction lifted completely from them and all 44 families who have assured shorthold tenancies (ASTs) on the Guinness Estate in Brixton. They have all been told they must find their own accommodation and leave by the end of April.

We want every tenant to be transferred onto a secure tenancy so that they can be reassured they will have an affordable home in the local area to move to when the demolition of the blocks begin.

And every tenant is feeling more determined after this victory that they will all refuse to go and resist any attempts to evict them until they get securely rehoused.

This morning we are holding our daily protest at 9am outside the Guinness Housing office on the estate to demand secure tenancies and no evictions. This will be followed by a campaign meeting to decide our next steps. All residents and supporters are welcome.

Who is facing eviction on Loughborough park estate?

44 assured shorthold tenants (ASTs) and their families have been told to leave their homes by the end of April. Some have been taken to court and some are waiting court hearings. One family is facing immediate eviction because Guinness has used the excuse of rent arrears to get an eviction order against them sooner.

Guinness say that they are rehousing most of their tenants on the estate – why not these tenants?

Loughborough Park originally had 390 flats rented to secure tenants. As people left the estate Guinness replaced them with tenants on AST tenancies which is the same type of tenancy people usually have in private rented accommodation. So legally these contracts do not entitle the tenants to be rehoused by Guinness. Guinness is only building 300 flats that will be for a social rent level in the ‘regenerated’ estate so they only kept 300 secure tenants. This is a loss of 90 social rented flats in Brixton.

Why did Guinness use AST tenancies instead of the usual housing association secure tenancy?

Guinness has been planning the ‘regeneration’ of this estate for a long time but there were continual delays. They brought in ASTs to keep the flats occupied before they were demolished. The ASTs paid all the same rent as secure tenants but were seen as disposable. Most have been there around ten years and many have had children while living there but they were never changed over to secure tenancies. 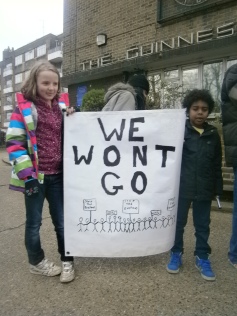 Guinness say they had to regenerate the estate because of its condition. They said they had to build private flats to finance the improvements. Is this true?

The Guinness flats definitely needed to be brought up to the decent homes standard but many councils and housing associations have been able to do this without knocking down the existing flats. Opposition to demolishing the estate was the main reason for the long delay in getting planning permission. So there were alternatives. The Mayor of London has a big billboard outside Loughborough park heralding its investment in the regeneration so Guinness got public money in this scheme. It was a political decision to spend that money subsidising the building of more expensive private flats and reducing the number of social rented flats – it was not the only way to spend that public money or improve the estate for its’ residents.

Guinness say they are evicting the family on Thursday for rent arrears not for the regeneration scheme. Is that true?

No. Arinola and her family were told in no uncertain terms along with all the other AST tenants that they had to leave (initially by the end of March this year). They were promised they would receive £4,700 compensation after they left – with a stipulation that any arrears would be deducted from that payment. Not surprisingly Arinola (and some other tenants) calculated that they would need that money BEFORE they moved out in order to pay a deposit etc to secure a flat in the private sector and the letter indicated that the arrears would simply be deducted so they stopped paying their rent. Nobody would blame them if they didn’t trust whether Guinness would actually pay them that money in full after they left either. So arrears is not the issue – the eviction was already planned before the tenant stopped paying their rent.

Arinola has paid her rent for ten years and would happily clear the arrears if she could be allowed to stay in an affordable Guinness property.

Guinness say the protest occupation is actually a squat – why?

Some AST tenants decided to occupy an empty flat on the estate as a way of highlighting their situation and to create a base on the estate so they could appeal for people to come down and support them in resisting these evictions. That is what has happened and the tenants are overwhelmed by the support and solidarity that people have shown by coming down to occupy the flat on a rota basis. It is not a squat because nobody actually lives in the flat or intends to make it their home. The AST tenants have homes on Guinness – they just want to keep them!

Guinness want to label the occupation a squat in order to scare people that it is illegal (which it is not!) and to pretend it is ‘outsiders’ and not their own tenants they are fighting.

IF YOU HAVE ANY OTHER QUESTIONS PLEASE JUST ASK.

There was a good turnout of residents and supporters for the protest outside the Guinness office this morning – but no sign of Guinness! We plan to hold a protest there every morning at 9am until they show their faces!

Also, there will be an occupation meeting at the occupied flat (82 Elveden House) each evening at 7pm to discuss plans.

Our flyer is here:

We are holding a protest against the evictions, the first of which is due to take place on Thursday, outside the Guinness Trust office on the estate at 9am tomorrow morning. Please come if you can!

Back to top
GUINNESS OCCUPATION
Create a free website or blog at WordPress.com.